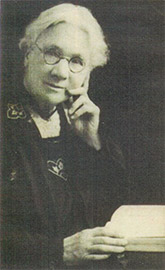 Rebecca Cheetham was a celebrated woman who did a great deal of work within the Newham community. She was the first warden for 25 years of the Canning Town Women's Settlement and associated with them for nearly 50 years.

She began her career as mathematics mistress at Manchester High School before taking on the role of first warden in 1892. She also served on the Education Board of the (the named) County of Borough of West Ham and as such, many of the Social Services of the borough owe their existence to her untiring work.

Rebecca Cheetham Nursery School was offically opened in August 1930 by Ms Margaret McMillan who was a pioneer in the Nursery School movement. At the time, Rebecca Cheetham was thankful for the honour of the nursery being named after her and said that she hoped that nursery schools would spread throughout the country, so that young children might be nurtured in readiness for theireducation.

She was 87 when she passed away.